Intelligent Video Analysis(IVA) is becoming increasingly popular in the video surveillance industry. Recently, Human Behavior Recognition(HBR) and Human tracking across multiple cameras have become attractive research fields. Performance of both of them immensely depends on the Human Body Pose estimation. As an AI startup company, We have been developing our own state-of-the-art human body pose estimation model which is named as AsillaPose.

Nowadays, there’s a number of human body pose estimation models available to use. However, most of them are challenging to use in real world applications, especially in the field of security and surveillance. Our mission is to build a fast and robust Human Body Pose Estimation model which is compatible with real-world applications focusing on the security and surveillance industry.

In this article, the following parameters of AsillaPose v4 are compared to OpenPose.

In addition, we would like to introduce the unique features of AsillaPose V4 Lite which can magnificently satisfy market requirements.
Let’s look at the performance of our pose estimation model.

COCO 2017 validation dataset with 5000 images is used for the accuracy evaluation and comparison of AsillaPose with OpenPose. OKS(object keypoint similarity), Precision and Recall metrics are used for evaluation.

Results on COCO validation dataset are as below, 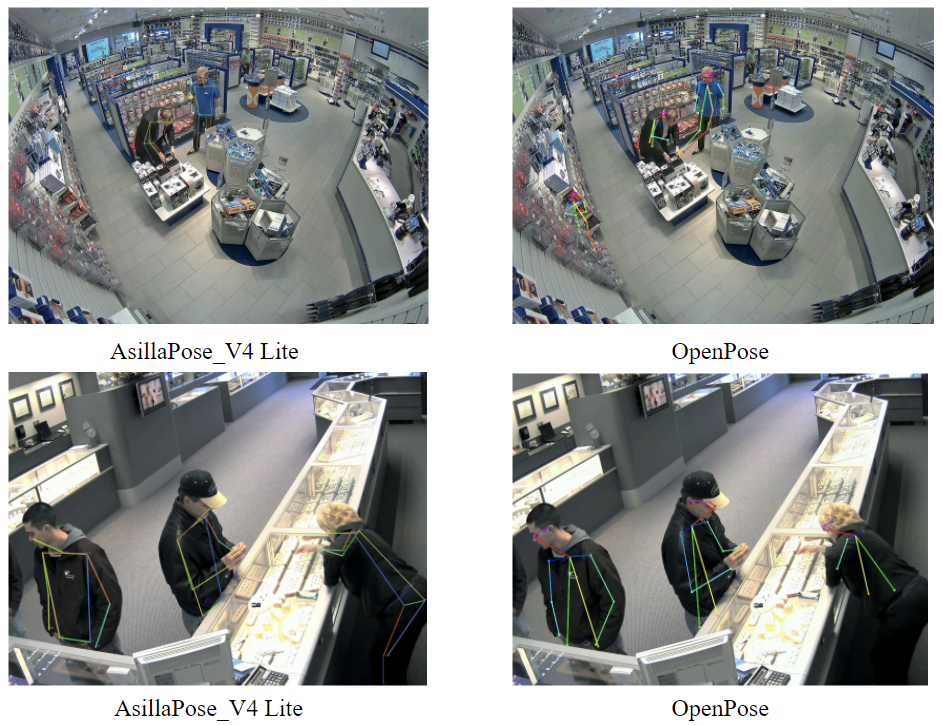 1  It's work well with steep security camera angles which we meet in real-life applications specially in the security and surveillance industry.

2 AsillaPose V4 Lite is also capable of estimating poses of people who are far away from the camera.

3 AsillaPose V4 Lite is able to detect a range of poses like when people are sitting, walking, running.

When it comes to real-time applications, speed is one of the biggest challenges to overcome. AsillaPose can be executed even in edge devices such as NVIDIA Jetson Nano with very high speed.

Both AsillaPose and OpenPose models are executed on a NVIDIA Jetson Nano device in order to evaluate the inference speed. System configurations of the device are as below,

Inference speed comparison of AsillaPose V4 Lite versus OpenPose is shown below,

And the following graph shows speed comparison for increasing the number of people. 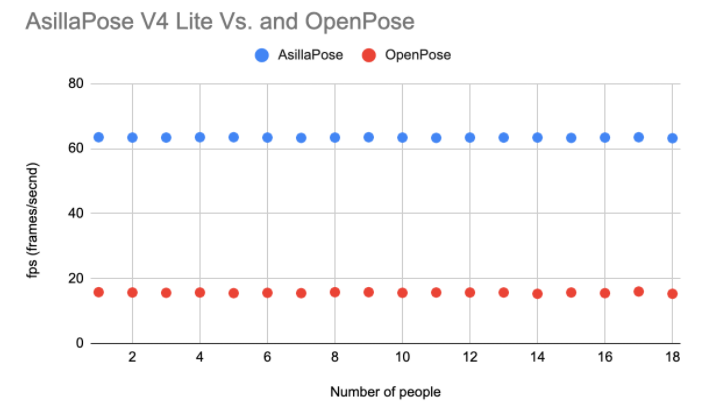 As a responsible AI startup company, We’ve been developing our Human Body Pose Estimation model, AsillaPose, with the capability of applying it in real-world applications, specially in the security and surveillance industry.
Initially, AsillaPose V4 Lite is targeted to apply in following applications,

Developing Human Body Pose Estimation models is not the only thing we do. With the ultimate goal of being a guardian of the world, we’re developing a complete Software Development Kit(SDK) which compacts three main solutions, a Human Body Pose Estimation Model, AsillaPose, an application for Multiple Camera Tracking and an Abnormal Behavior Recognition application.
The SDK will officially be released in March, 2021 at Innovation Leaders Summit in Tokyo.